​180 alpacas (including crias), 35 new forever homes, 23 weeks, 6,550 miles traveled, 20 over-night stays and more phone calls then we care to count, the Polk County Rescue is complete!  The last two alpacas will become part of the Oregon State University herd.  One has leukemia and the other is pregnant and they are best buddies.
​Thanks to:  Polk County Sheriff Department – OSU – the many volunteers that helped transport and tag the alpacas – volunteer shearer, Jim Rowell of Alpacas in the Pines, for shearing the last 12 at OSU on July 3rd and to those wonderful, giving  and loving people who opened up their homes to in these 180 alpacas.
During the last 23 weeks we were also involved with the re homing of 44 alpacas.  Including 12 alpacas, 1 llama and cria with the Pierce County Animal Control here in Washington State.  In June we were contacted to help re home 48 alpacas up in Bow, WA.  (if you could provide a new forever home for some of these in Bow, please contact us at, ccar@alpacarescue.org.)
Your continued support is truly needed.

​Thank you everyone for your interest! Please, no more adoption requests for the time being. We are overwhelmed by requests and need to catch up.
​We also just got word from OSU that the last cria that was born is off oxygen and nursing!!!

I want to thank everyone for being so patient while we sort this out. We have had to make some very tough decisions on behalf of these animals. We have started the adoption process and need to pass along some important information. First of all there will be a $25.00 charge for each and every animal. No exceptions. This fee is to help the Polk County Sheriff’s Office with the thousands of dollars spent on caring for these animals. The checks will be made to them. Second, I know many of you wanted to adopt so that you would get breeding animals. This is not possible. With little help from the Registry we will not be able to match animals to papers. Males will all be gelded. A large percentage of the females are already pregnant but will be adopted out as non breeders. They need time for bodies to heal and have been through enough already. If this is not acceptable to you and you are on the list, please send me a message via Facebook Private Message and I will take you off the list.

​The last 35 alpacas were taken to OSU today!!! Eight more were gelded and the best news…smallest baby is nursing!!!

​We got all but 35 males moved today. We had another birth and unfortunately two deaths. We lost two females. The cria is only 10 pounds and not nursing yet but he is in great hands.

Breaking news! It’s a girl! Female huacaya born yo the Polk County herd. She is underweight but strong.

Not the best day for our little rescue operation. We did not get word that OSU was closed due to weather until after we left with three trailer loads of alpacas. It was not snowing where we were. Even though staff had already left they came back and took in the animals . Unfortunately, one of the trailers was rear ended. Though there were no obvious injuries, seven of the animals were admitted to the hospital. Bills are mounting quickly so the fundraising is more important than ever. Prayers and good thoughts are needed now more than ever.

Sadly we lost a small juvenile female yesterday. I wish she could have held on a few days. Hopefully she will be the last. Tomorrow we will be moving the entire herd to a location owned by Oregon State University (OSU). They will all be on grass pastures (most for the first time in their lives). They will be under the care of Dr. Cebra who will be drawing blood for DNA and starting parasite regimens.

​We received the best possible news today! The animals have been officially signed over to the Sheriff’s office. We will be moving them very soon to a location to be DNA tested, wormed etc.

An auction has been set up to benefit the 176 starving Oregon alpacas being rescued. A huge thank-you to Marjorie L Phipps for setting this up. Now we need items to auction. You can donate whatever items you want to the auction item sales. You will need to join to donate and to bid. Eventually there will be some alpaca herdsire breedings on there too. So here is the link: http://www.llamaloverescue.myevent.com/?1391360883. Please be generous with donating items and breedings. Information shared from Ann Merriwether.

Just wanted to give a quick update on the Polk County Alpacas. Wednesday and Thursday were spent catching, scanning and tagging all of the alpacas. Five boys were pulled from the girl pen. You know what that means. A male suri cria was born on Thursday morning. So far so good with him. Friday was spent organizing paperwork and pictures as well as phone calls to Vets. Thanks to Ellen Gurewitz for donating AlpacaEASE software! Saturday and Sunday spent putting alpacas on AlpacaEASE and making packets for each animal. Thanks to all who are making donations. That is what makes this possible. A huge thanks to our volunteers, we couldn’t do it without you! We shall see what next week holds.

These are some of the alpacas we are currently helping.  Photo shared from Gary Kaufman: 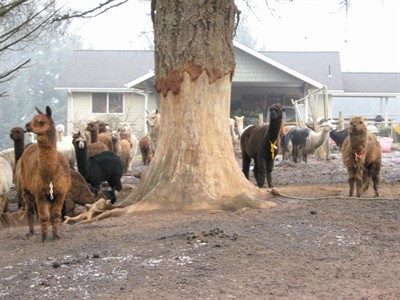 ​There were as many as 200 being kept on 3 acres with little or no food.These animals are in terrible conditions and as many as 50 have already died. We will be taking on the monumental task of sorting the animals and trying to get the papers for them. We will also be screening adopters. We are in dire need of donations at this time to help get these animals to loving homes. you can donate through paypal on our website. Every dime helps. Below is from the local paper.
​1/21 BREAKING NEWS: Animal abuse charges filed
DALLAS — The owners of Jocelyn’s Alpaca Ranch in Falls City were charged with several counts of animal neglect Tuesday afternoon after alpacas on the farm were found dead or starving.

I have been in contact with Lt. Jeff Isham of the Polk County Sheriff Office in Oregon. There are 150 alpacas that have been seized and will be in need of homes in about two weeks. About 80 are registered. If ever there was a need to give a home to a rescue, this is it. All animals are free and some are quite nice. Those that are not registered can possibly be DNA tested at your expense.
If you are interested at all, Please contact Lt. Jeff Isham @ (503)623-9251.
Support Us